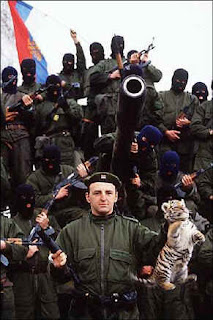 I’m still unsure exactly what to be doing with my blog… Do I keep it to just music? Or football? Or everything in my life? My idea of a blog is an online diary, somewhere to air your thoughts. I guess sometimes that thinking can be controversial.

The blog is new but news happened yesterday and a new European country was ‘created.’ Now gentlemen should never discuss religion or politics and one of my aims in life is to carry the grace of a true English gentleman, a dying breed in today’s morally mixed-up world. but there we go… rules are made to be broken…

I wanted to briefly talk about Kosovo as I went to Serbia in 2005 and it made a deep impact on me. I passed through on my way back from Istanbul in 2005 post-champions league final.

The full story of that journey can be read here on the facebook group ‘Hungary for Turkey’ http://www.facebook.com/group.php?gid=8280656361

I met lots of Serbs and they were particularly welcoming. There is a lot of good history between Britain and Serbia apart from the NATO airstrikes during the Yugoslavian conflict in the 1990s. Racially, the Serbs claim to be true Celts which with me being from Wales, lent them an affinity to me… My ideas on the Balkan conflict weren’t clear but I know that in general in the Western press the Serbs come across somewhat as the villains of the piece. Now , all I can say is that there were undoubtedly some serious atrocities committed during and indeed after the whole conflict. It was one of the messiest civil wars in European history. However, all sides committed atrocities. Such, unfortunately , is the nature of war. I read and studied quite a lot on Serbia and can recommend the book by Tim Judah: The Serbs for some decent background knowledge.

Regarding Kosovo, I was told stories by many natives during my stay., in particular an Orthodox monk, who sold me some icon cards of the Kosovan monasteries, at Belgrade train station. The Serbian people were saddened by the ongoing international presence in their ‘historical backyard’. Most of Serbia’s precious historical buildings and monuments are located in Kosovo and it is a very important historical area to their proud nation.

What happened is that the Ethnic Albanian population living in Kosovo through a higher natural growth rate, became the dominant population in the area. The political effect of this created friction with Belgrade and during the bitter intra-ethnic fighting during the civil war Kosovo bore the brunt of some of the fiercest malcontent. Since the fighting ‘ended’ Kosovo has still been an ongoing subject of debate and potential dispute and there has been a constant international peacekeeping presence there. Yesterday, the Kosovan regional government, with the backing of the USA and Britain but under fierce opposition from Russia and Serbia itself, declared independence. That there isn’t a fresh war already surprises me slightly. I think that as things now progress there will be a lot of new tension in the whole area and Serbia will reject integration with Europe completely and lean further towards its traditional Russian allies. This seems a shame to me after meeting so many nice people there.

I know that this deoesn’t make anything right politically and that there are people who feel particularly strongly about this issue who will know far more than I do. I put my foot in it the other week, talking about Serbia with a friend, whose family were ethnically cleansed Hungarians from the North of Serbia . Also my Auntie is actually of Albanian heritage. Plus I have made friends from all over the former Yugoslavia and in other Eastern European areas. I do, however, based on my own reseacrh, feel that Kosovo does correctly belong to Serbia and shouldn’t be independent.
When you are an Englishman living in Wales you are well aware of national frictions. However it would be a very unsettled world, moreso than it is indeed now, if breakaway regional groups were simply legally allowed to spring up into nation states everywhere. Wales is technically a principality, not a nation. I’m sure that there’d be a few Welsh people who’d love a war with Britain or a complete breakaway nation, but the issue is addressed politically. rightly or wrongly that is so. In other areas such as the Basque region of Spain or in Northern Ireland, there has been a great deal of trouble due to issues of nationhood. What are your feelings on Kosovo?
Let warlike arms give way to the peaceful gown, and to the statesman’s praise the victor yield his crown… (CICERO-The Offices)
Uncategorized
Share :