Liverpool victorious in clash of titans 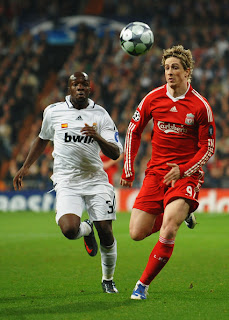 When the draw for the first knockout round was recently made, a shiver of excitement ran down my spine. Liverpool drew Real Madrid. It was to be a two-legged clash of European titans. Real Madrid are the most succesful side ever in the European Cup, having lifted the ultimate club football trophy on no less than nine occasions. Liverpool rank third in the overall list with their satisfying tally of five European Cups. As a Liverpool fan, playing the big sides inspires me not with fear but with eager anticipation. You cannot gauge your team when they play poor footballing sides. When they play a really decent side, you see the true game of football, where players are fired up and the beautiful game flows. This would be the biggest game in European football for many years, perhaps even eclipsing the two finals Liverpool have played against AC Milan in recent years. Milan are sandwiched between us and Madrid in second place of the overall European Cup League. Milan are seven times winners.

Real Madrid last met Liverpool in the 1981 European Cup Final in Paris which Liverpool won to lift their thrid European Cup. Matches between these two giants are therefore rare and something to be cherished. Rafael Benitez is a lifelong supporter of los Blancos and used to work for them so the fixture took on extra importance for him.

Madrid came into the fixture with an impressive run of domestic form under their new coach, Juan de Ramos. They were unbeaten in nine games. Liverpool’s league form has been faltering since Christmas and they have all but surrendered their chances of winning domestically to Manchester United. This placed the importance of the European knockout stages at a premium. Our season’s business this year is the European Cup. it’s the only realistic trophy we are able to still win. Appetite whetted, the first game took place at the legendary Bernabeu a fortnight ago.

At the Santiago Bernabeu, Yossi Benayoun scored an 82nd minute winner to score a landmark victory in one of the toughest places to visit in world football. Real Madrid had to now brave the gauntlet that is Anfield on a European night, in order to salvage their European season.

Tonight’s match saw the mighty redman set out their stall from the start, putting immense pressure on los Galacticos and defending their lead. Fernando Torres scored his first Champions League goal of the season early on. Liverpool captain, Steven Gerrard added two more goals before Andrea Dossena scored his first ever Liverpool goal to put the icing on the cake and make it 4-0 on the night, 5-0 overall on aggregate. the match was a breathtaking display of football and a very memorable night in club history.

Liverpool now travel to Old Trafford on Saturday on the back of this result’s high and shall hopefully demonstrate their capacity to beat the top European teams. If only we could get results against the Middlesboroughs, Tottenhams and Evertons of the football world and perhaps we’d be able to lift an elsuive Premiership trophy! Still – It’s a European year this season and we’ve KO’s one of the strongest teams left in the competition. Let’s march onto Rome and make our season a success!