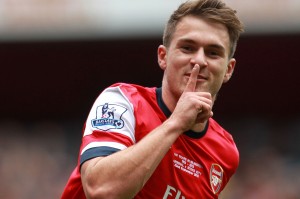 It was immediately clear from the start that we were facing high quality opposition. Whereas there are other premiership sides that pass the ball and retain possession well, Arsenal are masters. Their passing is not just quick and clean, it’s incisive. They play very creatively and recovering possession is difficult. We have to make our attacks count as they will be fewer and far between. A surprise to me was the starting of Jon Flanagan at right back. Him and Cissokho out on the wings will most probably both face a tough game.

The early possession was divided up roughly 60/40 in Arsenal’s favour. It was back and for and Liverpool’s Jordan Henderson broke through into the box well yet was unable to finish off properly. Liverpool had a few early free kicks in the opposition half but nothing productive seemed to be resulting. In the 19th minute Arsenal’s Santi Cazorla hit a flying shot which luckily rebounded off the post. Not so luckily the rebound fell right back to his feet and he comfortably slotted the goal into the net past a fallen Simon Mignolet. Arsenal were sharp and now had managed to maintain their record of scoring in every premiership game so far. It was 1-0 and our challenge had become a lot harder.

Bacary Sagna entered the book for a challenge on Luis Suarez, who had started to motor up against the Arsenal defence. Steven Gerrard lifted a lovely free-kick into the box and the keeper made a cracking stop to a Liverpool header but it would have all been in vain anyway as it was given offside. At the other end of the pitch Aaron Ramsey forced a good save from Mignolet. Sagna managed to outwit Aly Cissokho and he received the second booking of the game. Arsenal, when attacking, were really making us look uneasy. If Liverpool want to get anything from the game we need to focus on maintaining possession and allowing our attack to devastate.

The first half finished and Arsenal were clearly on top with a goal, more shots on targets and 60% possession. Brendan Rodgers decided to act at half-time and our Brazilian dynamo, Philippe Coutinho, was brought on, with Aly Cissokho being replaced. A very positive manoeuvre and hopefully the impetus we need to get back into the game.

Early second half and Liverpool began well, putting Arsenal under pressure. Suarez took a slight knock which was worrying. However, a couple of minutes later and he was delivering a quality ball into Jordan Henderson, only for him to volley narrowly wide. The change in formation certainly did seem to initially work.

We were very luck when Kolo Toure made a terrible defensive error. He passed the ball across the goal towards Martin Skrtel, but it fell short. Olivier Giroud jumped onto it and with a clear sight of goal, he looked nailed on to score but slipped it wide. It was a really lucky break and in all honesty we should have been two down. Arsenal started their incisive attacks again and Mignolet was being called into action. In the fifty-eighth minute Aaron Ramsey collected the ball at the edge of the box and with superb control he unleashed a tremendous strike which left Mignolet for dead and spun into the top corner. It was easily the best goal we’ve conceded all season and was pure class. He has ten goals so far this season and is on form and dangerous.

Rodgers decided to sacrifice the other wing back, Flanagan going off for Victor Moses. We have to throw everything at the game and it was a sensible move. Despite our tactical changes the game still looked well beyond us. We were being outclassed. It’s a step up and as the game wore on I felt a bit hollow. Was it really beyond us to be true title challengers? The Emirates is not an easy place to get a result for anyone.

Arsene Wenger made his three changes, bringing on Nacho Monreal, Thomas Vermaelen and Carl Jenkinson. Liverpool kept up pressure and seemed to do well territorially but we just couldn’t break down the solid defence properly. It seemed like our biggest problem last season, the lack of goalscoring opportunities.

Luis Suarez had a good chance late on but couldn’t finish properly. Daniel Sturridge was berating him for not passing. Our SAS failed to function properly and it was the quietest I’ve seen Sturridge in ages. Brendan Rodgers looked quiet and subdued on the touchline and his sombre dark suit and black tie made him fade into comparison with the lively experienced Arsene Wenger. Tactically, Wenger’s experience shone through. Arsenal are the dark horses this season and look good, by far the best team we’ve faced. It’s back to the drawing board for our team and hopefully we will rebuild and stay in the top four. A lesson in class today and our boys will need to step it up. Arsenal 2-0 Liverpool

Man Of The Match: I like to pick Liverpool players for man of the match. Out of our lot Jordan Henderson, I feel, put in the best performance. But the man of the match has to be Aaron Ramsey, whose devastating strike really finished us off. It was a spectacular goal.

‹ Review: Siberian Education: Growing Up in a Criminal Underworld