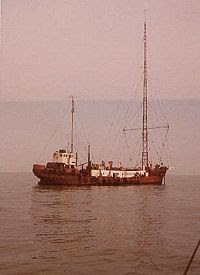 The sixties saw a massive boom in popular music. It was the golden age of Rock n’Roll. The youth of the world had a voice, and despised as it often was by the authorities, rock and roll redefined global culture. The birth of Pop music created a huge broadcast requirement. Vinyl making factories boomed as billboard artists fought for market share. Consumer society had a new outlet and the music industry seized control. In order to generate sales and introduce new music to the masses, a strong, effective medium was needed. Radio came into its own and Rock and Roll stations sprung up across America, beaming the controversial culture to the enthralled audience. In the UK there was no pop music radio station. Yet Britain was a country at the cutting edge of the revolution with the Beatles riding on a global crest of a wave. America had an easier time with its expansive commercial radio networks, though seizing the airwaves for pop music was not without its own battles there. In Britain the radio network was in government hands and tightly regulated. Radio Caroline looked for the loophole and found it in setting up an offshore broadcast, thus avoiding terrestrial regulations.

Ronan O’Rahilly and Oliver Smedley set up radio Caroline, named after President Kennedy’s daughter, and began broadcasting in international waters 5km off Felixstowe on 28th March 1964. It was not the first maritime radio broadcast. The Americans had conducted maritime radio stations since the 1930s. Also, in the North Sea, the Dutch and the Swedes had set up maritime radio during the 1950s. However, Radio Caroline was the first English language broadcast in the area and was specifically a pop music broadcast channel. Quickly dubbed ‘pirate radio’, Radio Caroline battled with the technologies and began to rapidly acquire a huge listenership. Logistically, running maritime broadcasts was a costly affair, in terms of finance, equipment, staff and dealing with constantly changing regulations. To generate income, Radio Caroline relied on advertising revenue and also subbed itself out to evangelical and religious broadcasts. As a business it was more a cutting edge technology, a disruptive technology, a people’s technology, rather than a money-making venture. As a cultural enterprise it was very successful. It gave birth to the careers of such legendary DJs as Tony Blackburn, Johnnie Walker, Dave Lee Travis and Tony Prince.

From day one, Radio Caroline had battles to fight, just to keep its very existence. Firstly, broadcasting from a ship was not technically easy. Broadcasting equipment was very expensive, required a lot of power and had to fit into a tightly governed network. Complaints were that the Radio Caroline signal interfered with other frequencies, thus being dangerous to maritime activity. There were staff issues at the station with DJs in the early days literally being at each others’ throats. The government fought hard with tighter regulations, driving Radio Caroline further offshore and even to broadcast in Dutch or Spanish waters. Throughout its history, various regulation breaches have been cited by the authorities and Radio Caroline has been shut down with equipment seized. One of the more obvious difficulties that arises from broadcasting from aboard a ship is that maritime conditions, especially further out in the international waters of the North Sea, are very hazardous in themselves. When the budget means that your ships are old and rickety, it only takes a storm and the very lives of the Radio Caroline staff are in jeopardy. Many times throughout its history has seen broadcasters rescued by the RNLI and problems with ships has seen them run aground and even sink. Just to keep a broadcast signal alive is a near mission impossible.

The authorities had to counter this disruptive technology and seize back some control. Radio Caroline soon faced competition. BBC radio caved into the listeners and set up Radio 1, a new terrestrial pop music service. This was competition for listeners for sure, but Radio Caroline had created its niche in the market and was well liked. Programming gave it a character of its own with anthems being a regular feature and specialist shows, for example the progressive rock trend it keenly supported, kept it ahead of the less adventurous government-sponsored alternative. When taken off the air for whatever reason, Radio Caroline always bounced back.
Nowadays, the station no longer conducts its maritime broadcast, but is based terrestrially. It broadcasts via satellite, DAB and internet. It is widely available across the world and is still as popular as ever. Radio Caroline is an interesting tale and is an important groundbreaking radio service that has pushed the boundaries and set the agenda for all broadcasts that have followed. We now move into an age where a definitive radio revolution, the internet radio revolution, promises to expand the Radio Caroline dream even further out to sea. KryKey is part of this new wave of internet radio and offers a radical solution to broadcasters who want to set up their own PRS (Personalised Radio Station) from the comfort of their own home and reach the ears of listeners across the globe. Unlike Radio Caroline, there are no expensive broadcast costs, regulations aren’t as strict and more importantly by broadcasting you won’t run the risk of seasickness and sinking! Transmissions will increase as the web radio phenomenon booms. KryKey is the new disruptive software for radio, the Radio Caroline of the electronic seas of the twenty-first century. We hope that in forty years time, our story will be as rich a read as the Radio Caroline adventure.